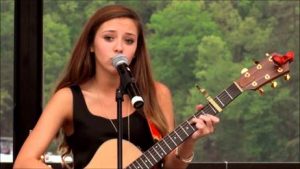 Currently a student at Belmont University in Nashville.
Rachel grew up listening to her father play, sing and write songs. He would encourage her at a very young age to sing along with him at family gatherings. It was when everyone would stop washing dishes or watching the football game to come listen that it was evident that she had something special. Rachel began music school when she was 11 years old. Then she worked with developmental groups like Nashville Spotlight and Georgia Country Gospel Music Association, which provided many performance opportunities through their showcases and talent competitions. She got her first guitar and began her songwriting at the age of 13. She shared her first original song at Florabama Lounge while on summer break.

Rachel and Erik Grant Bennett spent time writing together and recorded an album in 2014. The album is called, “A Hundred Places” and some of the songs receive airplay on ATL Radio 105.7 FM as well as internet and college radio. Her album is available on iTunes.

Rachel has played venues in Atlanta, Athens, Nashville, New Orleans and L.A. She has opened for artists such as Ashton Shepard and Big&Rich. She is playing again this year at Gwinnett Relay for Life at the fairgrounds to thousands of people. Rachel will play a short acoustic set and then she will sing the luminary song that was written by Erik, “Guess this is Goodbye” to honor those we have lost to cancer.