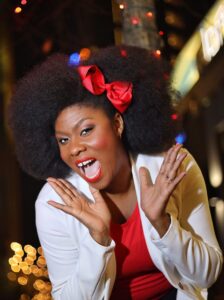 Jessica It’s All Good is a vibrant, clean and positive comedian who is here to change the world one mic at a time! This southern, chocolate dipped lady brings to the stage her unique perspective, high energy, and a bold stage presence that appeals to the masses. With a background in theatre and leadership, Jessica produces comedy shows around the Greater-Atlanta area. She performs all over Georgia, the USA, and online. 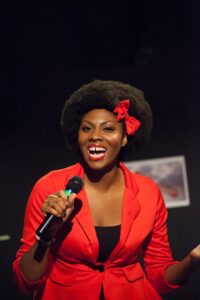 Jessica It’s All Good is a lady comedian from the South with a loud personality, no shame, and not a whole lot of inhibitions. She has rocked out places like The Comedy Zone, Laughing Skull Lounge, Uptown Comedy Club, MadLife Stage & Studios, Truman State University, Spartanburg Methodist College, State University of New York College at Geneseo, Emory University, and many more. In 2014 she won her first comedy competition and received the 1st place prize of The Rev’d Up Comedy Jam Contest. She went on to perform in other competitions and was a semi-finalist in the 2014 Atlanta’s Top Comic Comedy Contest. In 2015 she took her comedy special: “Memoirs of a Supermodel Princess Clown to The Complex Theatre in Hollywood, CA. In 2020, Jessica produced her new, race related, comedy special: “WE’RE ALL CHOCOLATE,” with the support of several donors. In 2021 it was nominated for “Mind-Blowing Comedy” For Comedic Writing Of The Year in the Writing/Adaptations category of The Young-Howze Theatre Awards. Whether she is traveling, performing locally, or online, Jessica keeps the energy high and the laughs flowing. Her comedy will go down in history as comedy for positivity and change, and she’ll keep it clean while on the way.