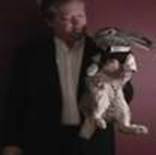 Do you believe Mark has ESP?  Well how about ESPN?  Either way your guests will be thrilled that you provided the comedy mind reading of mentalist Mark.  A show that features audience participation and laughter!  Mark’s lovely assistant is a Flemish giant rabbit.  One of the world’s largest rabbits!  Imagine this!  Weighing in at over 20 pounds, that’s right, 20 pounds.  Einstein finds a previously selected card, pulling it out with his teeth!  (As seen on animal planet).